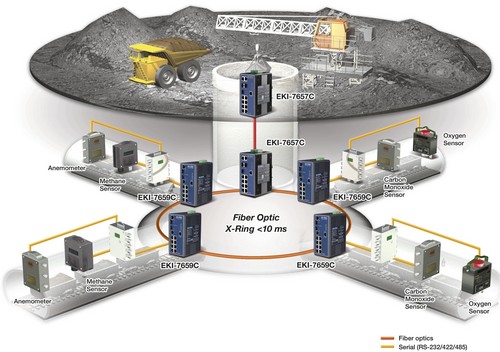 The way mines are controlled and monitored in the current day and age can easily be revolutionized by using fibre optic sensing technology. Issues such as lack of data for decision making, costly surveys and conventional measurements systems, late diagnostics of hazards, faults as well as unpredicted incidents are proving a challenge for many mining companies. With fibre optic sensing technology, mining companies will have an easy, safe, accurate, rapid and a reliable way of monitoring and sensing.

There are numerous investigations into the fibre optic sensing technology which are currently being conducted so as to be able to determine the high value mining applications as well as assess at high level the gap (technology wise) for each and every application. These investigations are also meant to work out some of the value and value that comes with using fibre optic sensing in underground coal mine as well as mining in whole.

The investigations which were carried out revealed that in general fundamental technology components usually exist in an off the shelf format and often do have an outstanding performance specification when it comes to sensitivity (for acoustic sensing 120dB), accuracy (for example 0.01 deg C when it comes to temperature sensing), sensing range which can go up to 50km of fibre and lastly spatial resolution which can go as low as 15cm along a fibre for each one of them. The benefits that come with using remote sensing on passive optical fibre without the need to use discrete sensors as well as power distribution have obvious application in mining which can be clearly seen especially when it comes to mining areas that are hazardous such as underground coal mining.

Researchers from University of Queensland as well as those at CRC Mining have set up a collaborative group/team which will work on developing fibre optic based gas sensors which will be used for mining applications.

Methane gas which is usually found in underground coal mining poses a huge threat for both the workers who work at these mining sites as well as the mining companies operating in these regions. The common challenges which are faced by the workers and mining companies include impact on the green house as well as safety and health issues. With the optical fibre technology you will be getting a fast and remote means of sensing without necessarily having in place electrical equipment present at the mining site. The spectroscopic detection which is near the infrared allows for a more accurate, selective, and sensitive detection of methane. Despite all of this, there is currently no spectroscopic fibre optic methane detection system which has been made commercially available for use in underground coal mines.

The first stages of this project saw the spectroscopic fibre optic being developed using open path gas which were pre-filled with concentrations of methane which were known. Also looked at or investigated was the measurement of the average methane concentration, this was done by using a number of gas cells which were connected via a single optical fibre. Based on the findings of the project which was conducted, it was evident that open path gas had a fast response time, sufficient accuracy and robustness as well as excellent sensitivity, all this sign goes to prove that it has the capabilities as the future underground mine gas systems.

The second project saw experimental analysis as well as development of the 3 microstructure fibre optic sensor heads which are drilled hollow core fibre, tapered fibre and drilled single mode fibre. The results from this experiment revealed that both the drilled singe mode fibre as well as the tapered fibre was unable to detect a signal which is corresponding to methane this was due to the fact that there was limited interaction volume between the laser light and the methane gas. On the other hand, the drilled hollow core fibre managed to detect the presence of methane accurately with a response time which is reasonable, this it managed to achieve despite the fact that the methane gas was diffused into the core of the fibre. To summarize it all up when it comes to developing methane sensing systems in partnership with other industries commercially both drilled hollow core and open-path gas cell showed high potential.

From this it is evident that when it comes to fibre optic sensing technology in mining the application are just about endless. The challenge that the mining sector/mining companies are faced with at the moment is identifying applications which can exhibit a small gap when it comes to technological implementation as well as be able to bring about significant and immediate value. Based on this selection, there is bound to be a number of pioneering applications which are able to bring immediate return to the mining industry.

There has been talk between big mining companies in with major fibre optic companies so as to come up with a technology implementation road-map for the mining industry which will also include the proposals high value as well as the system’s low technology gap.