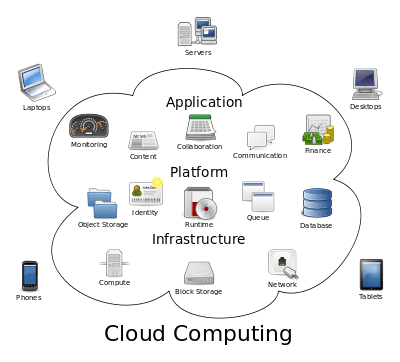 Cloudonomics, being the economic shift brought by cloud computing has been a hot topic with those who have a vested interest in fibre optic telecommunications. Not only does cloud computing change the playing field for hardware manufactures and internet service providers but it also means drastic shifts in corporate operations.

Having a central server doing all the ‘heavy lifting’ means that network engineers only need to manage the server end, whilst low powered clients enable an interface to the end user without any major configuration.

However, with server side processing more requests are made and more data storage space is required resulting in more stress on the network. This stress becomes an issue if there is a bottle neck in the network.

With old copper cabling, bottle necking is quite common. CAT6e cable has a limitation of 10Gbps which, coupled with the lack of industry standards mean that realistically throughput could be as little as 1Gbps. This is where the fibre optics and the NBN step in.

Fibre Optic connectivity opens the flood gate to new applications due to the potentially unlimited bandwidth capabilities allowing server side processing of data and graphics as well as reliable data storage a reality.

With a centralised network/cloud computing, engineers can deploy new software, address and fix issues and manage data with more efficiency ultimately saving both time and money for a company. However it’s the NBN that opens up the full potential of Cloud Computing.

Telecommuters with high speed NBN connection have seen a huge benefit being able to create, edit and transfer large files seamlessly between them and those in their network.

It’s not only the corporate world that is experience the effect of Cloudonomics either. With companies like NVIDIA working on client-server protocols that can process 1080p video server side over a fibre connection opens up new possibilities in the retail gaming markets. Console prices could drop and even the possibility of subscription services being offered to effectively ‘rent’ server processing power for gaming and computing needs.

Although, the cloud is revolutionising the I.T market and subsequent markets that rely on computing technology, it still will be some time before client side processing is completely phased out. However, with more security, easier data management and enhanced access to almost any internet enabled device it won’t be long until Australia and the rest of the world will be embracing the benefits of the cloud.

Sydney Swtiches on the NBN

The National Broadband Network has been switched on in Australia’s largest city.

Superfast broadband now passes 1300 premises in Blacktown in Sydney’s West with another 9300 homes and businesses set to be passed over the next few months. The Sydney switch-on was marked at a ceremony at the Max Webber Library in Blacktown over the weekend which included the first live NBN-enabled children’s book reading session with popular Australian children’s writer, the international bestselling author Andy Griffiths.

“It’s a whole new way to reach readers and stimulate young minds,” said Griffiths, who read to the children and answered their questions from Melbourne over video via the NBN. “Better broadband is essential for Australia if we’re to keep pace with the rest of the world.”

Griffith read from one of his latest books, The 26-Story Treehouse, and said he often road tests new material on young audiences. “It was really high definition — I was amazed. You could see the faces of the kids beautifully,” Griffith said afterwards, as he noted the educational potential of the NBN.

“Where I’m excited with the broadband is that you can get authors — and of course people from all walks of life — beaming into schools where you could never physically get just from the limitations of time and geography,” he said.

“I think it’s exciting for kids across Australia.”

Educators agree. A study produced for NBN Co shows teachers in NBN-enabled schools believe better broadband will help students to improve the quality of their work and the way lessons are delivered^.

“We encourage people not only in Blacktown, but in other areas where the NBN is available to find the right package for their needs by contacting their preferred phone or internet service provider.”

Construction is set to have commenced or be complete for around 1.4 million premises across the state by mid-2016. The entire nationwide rollout is due to be completed by 2021.